On vacation? Love thrillers? Try these:

Are you the kind of person who relishes the idea of whiling away a few hours relaxing on a beach with a good book? If you are, then we’re very much alike. Imagine; you’ve already escaped to that exotic destination, a chilled glass of your favourite tipple is gathering condensation on the poolside table and the sun is caressing your deserving skin with its sensuous embrace, what novel could possibly complement such a setting?To my mind, luxury sedentary pursuits like this deserve a cracking adventure thriller grounded in a myth or an historical event.

As an author fascinated by this genre, and of course a voracious reader, I have, for many years, taken to grading the books I read in case I ever choose to reread a novel in my dotage, and if I ever contract Alzheimer’s, heaven forbid, any one of the rare 5 stars from this list would keep me entertained for years.

I have chosen three great reads for you that I guarantee won’t disappoint.

Will Adams – Newton’s Fire. An exceptional blend of well crafted prose and pace. Luke Hayward, a disgraced Newton scholar, makes a discovery in a dusty attic that has consequences beyond his understanding. He follows historic Masonic clues to a tantalising artefact of awesome power and of course he’s not alone in this pursuit, a religious fanatic will stop at nothing to get to it first. Published by Harper (ISBN: 9780007424221).

Michael Cordy – The Source. This book borders on brilliance. Academic Lauren Kelly’s translation work reveals the secrets of the Voynich manuscript. An attempt to steal her work leaves Lauren on the brink of death. In a race against time, her husband Ross, tracked by an assassin, embarks on a Peruvian quest to locate a place that challenges everything he thought about life on earth. Published by Corgi (ISBN: 9780552156981)

Paul Sussman – The Lost Army of Cambyses. Sadly Sussman passed away in 2012 but his literary legacy remains to enchant. The Lost Army of Cambyses is a spellbinding, masterfully written, ancient and modern treasure-quest rooted in the fabled Egyptian myth of a doomed Pharaonic campaign across the desert to destroy the oracle of Amun at Siwa. To appreciate the links between a mutilated corpse, washed up on the banks of the Nile, the savage murder of an antiques dealer in Cairo and the death of a British archaeologist in Saqqara, you’ll just have to read it. Published by Grove/Atlantic (ISBN: 9780802143785)

If you write about a place, you need to get it right!

Why do we like to read fiction? I’ve often asked myself that same question.

For entertainment certainly, ever since the Stone Age, story telling has been an integral part of our culture, and we all like a good story, right? Some people read to experience well written prose, I too find that a delight, that’s why I prefer books to movies. Most of all though, I read to be transported to an alternative reality.

The best way to describe it I suppose, is escapism. To encounter another person’s trials and tribulations from the safety of my armchair or pillow. A holiday for the mind if you will, and a holiday for me requires travel.

For a story to work well, locations I believe need be fully developed characters. I like to feel the beating sun or torrential rain, taste the food, absorb the history and of course, as an adventure / thriller author, absorb the tension a particular locale incites. Locations offer so much potential for atmosphere that I can’t imagine enjoying a story without some well written insight into the setting.

Dan Brown’s novel “Inferno” describes Venice in glorious detail. He’s been there, that much is obvious. All too often I read a book where the author describes a place from research alone. I’m sure we have all read a novel like this. There’s something missing, and if we come across a blazing inaccuracy, we feel cheated. Hence the title to this piece, “If you write about a place, you need to get it right!”

Travel is an integral element in my research process. I have to confess, it also forms a significant part of the pleasure. Often, I’ll take a journey with only a vague idea of the plot and rely on the destination to fill in the detail. I take copious notes, collect pamphlets and sometimes dictate my thoughts and feelings into a Dictaphone, especially if the environment is thermally hostile like the deserts of Egypt or incomprehensible like Japan. By the time I leave, a well formed, believable character has been born. Hotels, artefacts, well known sights and sometimes hiding-places have flesh. The path from one scene to another is known, and of course, I’ve had a holiday. Surely you wouldn’t begrudge me of that.

Photography too can be of enormous help, especially as we don’t have to print our pictures anymore. As the old saying goes, “A picture paints a thousand words”. Having a relevant image on one screen, and my book on the other, the process of writing becomes swift and hopefully, having had first hand experience, the colours and pictures I paint with words ring true and add to the reading experience. 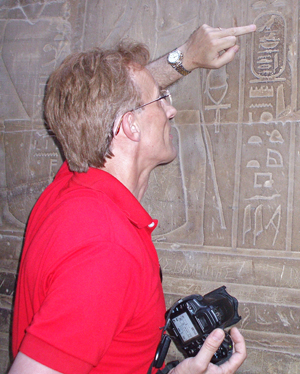 The Cartouche of Alexander the Great in Luxor Temple.

Everyone has a favourite, and if I had to choose, I’d probably say Egypt. Every couple of years I go to recharge my archaeological batteries. I became so enamoured with its past, that to understand it better, I taught myself to read hieroglyphics. It is not by coincidence that the "Webb of Relics" has Egypt as its primary setting.

The country at present, is sadly unsettled with political turmoil. However, those willing to brave this unfortunate instability are richly rewarded. Enigmatic sights such as the temple complex at Karnak, the valleys of the Kings and Queens and of course the pyramids, are all but deserted. If I had to make a recommendation for an area to explore, off the beaten track, I’d point you in the direction of the ancient burial site of Sakara. It is a site steeped in history with exquisite tombs resplendent with breathtaking art and stories to match. If you can, find yourself a guide well known to the guardians. Tombs, normally closed to visiting tourists, open magically with a polite request and a few Egyptian pounds.

One final word of advice. Don't change your currency at home, wait until you arrive at an Egyptian airport. You'll save a fortune.

PS: Cast your eyes over the pictures inside the "Novel Images" tab at the top of the page for some of the locations featured in my books.

I’ve been spending a little time networking and “playing” on LinkedIn.

An interesting question was posted by Nick Ekkizogloy of the Marine Corps College of Distance Education and Training (based in Quantico Virginia): Do you know any interesting idiom etymologies?

As an author, Idioms fascinate me, so like a dutiful soul I found myself contributing to the discussion. Here are a few of my contributions:

A day of special importance, for example a wedding or a celebration of a victory. I bet some of you think this derives from the Chinese (TV banking advert). The phrase originates in the custom of recording saints' days and holidays on calendars in red ink.

Often cited due to bureaucratic delay, excessive attention to the rules and regulations. The "Red Tape" is the red ribbon with which the civil servant ties his papers together.

A pornographic film. So called after brothels of pre-revolutionary China which were painted blue outside to advertise the presence of prostitutes within.

A woman notorious for her many seductions of men. The scarlet woman was seen by St. John in a vision, (Bible: Rev XVII, 3-4)

A wise rule, the best rule. The golden rule is found in the Bible: Leviticus XIX, 34: "Do unto others as you would like them to do to you".

Born with a silver spoon in one's mouth.

Born into a wealthy family. Linked to life expectancy. With infant mortality high in the middle ages, being fed with a silver spoon was an advantage. Silver has natural antimicrobial properties, unlike wooden spoons which harbour germs.

To make bricks without straw

To try to achieve some result with inadequate means. (From the time of the Biblical exodus "There is no straw given unto thy servants and they say to us make brick..." Exodus V.16.

A word to the wise

One word of advice or even a hint is enough for an intelligent man. (From Latin: "verbum sat sapienti" a word is enough to the wise).

To be on one's best behaviour. (The p's and q's refer to the type that the compositor sets up for printing).

I’ve been on my travels again. This time to the sun soaked sites in the Bay of Naples.

Always eager for new plot ideas, or potential locations, I thought a few days exploring the archaeological wonders of Pompeii and Herculaneum would tickle my inspiration gland. Although the excavations are magnificent, as sights of historical interest go they pale dramatically before the physical discoveries found there. To see these wonders in all of their glory one has to visit the Museo Archeologico Nazionale in Naples.

The museum is full of beautifully executed frescos, impressive bronze / marble statues and hundreds of immaculately preserved everyday artefacts. Most were unearthed from the ash and mud laid down during the eruption of Vesuvius in 79 AD. I found myself open mouthed and gawping in awe at possibly the most famous mosaic in the world; The Alexander Mosaic. Dating from 100 BC it depicts the battle between the armies of Alexander the Great and Darius III of Persia.
Now that’s what I call inspiration. 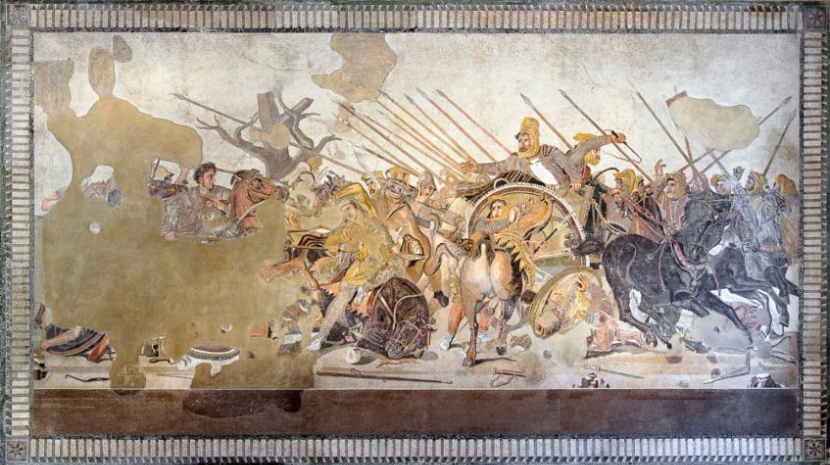